Update 06 August 2012: Will not work with Google Analytics Content Experiments.
Update 30 June 2011: Just updated the code to detect if it’s on the page, in case you’re not running a sitewide test.

I’ve been setting up some crazy-complex experiment on my blog recently and I figured I would simplify things by using Yoast’s Google Analytics for WordPress plugin. This is such a well built plugin but my only concern was that there was no easy way to pull Google Website Optimizer experiments information into it - so I wrote a little work-around. 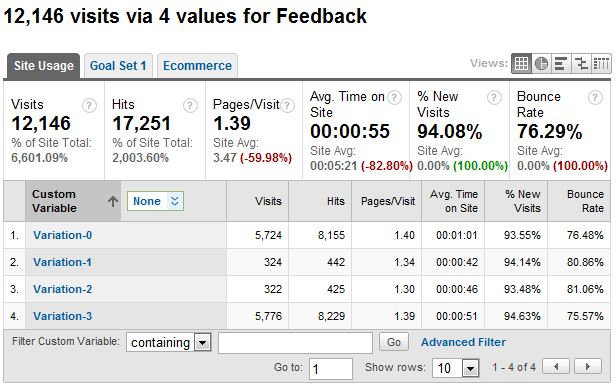 Rather than tracking a single goal - as is possible in Google Website Optimizer - track pageviews, revenue, time on site and bounce rate with Google Analytics for each of your variations.

On top of that,it’s incredibly easy to do, so let me show you…

So here’s how you set it up…

1. Adding the code to your site

The order of the scripts is extremely important. First comes Google Website Optimizer’s control script, followed by my GWO-GA integration function and followed by Yoast’s GA script or the wp_head() WordPress function - see below: 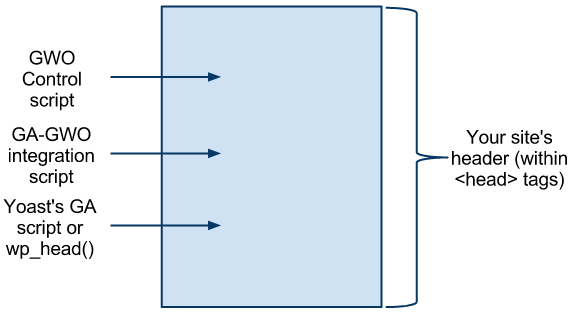 GWO-GA integration script
As shown above, place this script between the GWO Control script and GA script on the page (within the tags):

If you’re not using custom variables on your site, skip to step 3.

If you are, you’ll want to first determine which variables are in use, otherwise it will be overwritten. I’m not 100% sure how to do this, but you can check by going to a page with custom variables on it (i.e. a post page) and viewing the source of the page. Find the first number after ‘_setCustomVar’ in the line below:

In this case it’s ’1′. If you have multiple ‘_setCustomVar’ pushes, you’ll want to look for the highest number and add one. Because we don’t want that overwritten,we need to put it into an unused slot - in the case above, let’s choose slot ’2′. If you need help identifying this, please let me know in the comments.

Go into Yoast’s Google Analytics plugin and under ‘Advanced Settings’. You should see a field for ‘Custom Code’. In here you need to first modify, then paste in the following code:

Where ‘{Slot Number}‘ is the slot number you chose in the previous step. If you do not have custom variables enabled, you would set this number to ’1′.

Meanwhile ‘{Experiment Name}‘ is the name of the experiment (For every test you run, I recommend changing this to describe the experiment). Generally, keep this short so that it fits, and avoid using any quote marks or other symbols in here.

You would typically add the following for a test:

It should resemble the following once you’re finished with it:

4. Start your experiment and watch the data roll in

You’ll find it under ‘Visitors’ and ‘Custom Variables’ in the old interface:

Don’t be alarmed if you don’t see the data show up in your account for a few days - custom variables normally take 2 or three days to show up (even if your reports update many times per day).

Anyway, I hope you like it and found it useful. This is a sort of prelude to a better post I’m writing (I just had to get this out of the way first as a reference point for my next post for you)…

Want to join the discussion?
Feel free to contribute!

I'm a freelance web analytics and optimisation specialist that helps companies make data driven decisions to improve sales, revenue or other objectives. Currently, I work with clients in education, retail, banking, energy and not for profits. Enjoy my site!